Cards are submitted to Cardscore, which can then be viewed and scored – our term for graded – by the collector community.

This scoring process can be done by using our web application from a computer, tablet or phone. Individual collectors score on the same criteria that professional firms do – corners, edges, centering, and surface. After a card has been scored by over 100 collectors, the extreme outliers are removed and a final score is given.

The quality of images on Cardscore is a top priority. Since there’s no way to allow 100 collectors to physically hold a card, we wanted to provide the next best thing. Images on our platform are more than just a picture, and this is all made possible by our patent pending scanning process and scorekey device.

When a card is scanned, it is sent directly to the server and is available to view in our app in just seconds. Since the scan never hits a user’s device locally when it is scanned, there is no way the image can be manipulated. Cards are scanned at 1200dpi which allows for great detail to be shown on each card.

Scoring a card is easy. Here are the steps:

And that’s all there is to it! You’ve scored your first card.

The best part is, the score you’ve given the card will help decide the final score after 100+ other collectors have done the same.

Cardscore is the world’s first crowdsourced card grading (scoring) platform! For the first time ever, sports card collectors have a chance to take part in the card grading process.

Cards are submitted to Cardscore, which can then be viewed and scored – our term for graded – by the collector community. Cardscore provides a specific metric to the often used descriptions people give their cards of “looks nicer”, “nice”, “undergraded”, “great eye appeal”, etc.  It is not a replacement for professional grading, instead it adds an additional perspective – from the collector community – to a card that has already been professionally graded.

This scoring process can be done by using our web application from a computer, tablet or phone. Individual collectors score on the same criteria that professional firms do – corners, edges, centering, and surface. After a card has been scored by over 100 collectors, any scores that are extreme outliers are removed and a final score is given.

We have developed patent pending technology that allows for a card to be scanned at 1200dpi and is then available to be viewed in our app within seconds. The quality of the image was one of our top priorities when creating Cardscore. You can see great detail on the card and easily zoom to the level needed to fully access the card.

The scan is never available on a user’s device locally. It’s sent directly to our server which prevents the possibility for the image to be manipulated. The device we use to connect the scanner to our app is called a ‘scorekey.’ It’s currently only available to a small number of collectors for our initial projects, but will soon be available for the larger collector community to use as well.

We kicked things off with The Jordan Project where collectors were able to score eight different Michael Jordan rookie cards that were all professionally graded an 8. One of the most interesting outcomes was that an SGC card was the overall winner, and placed above other Jordans that had been professionally graded by PSA (even beating a PSA 8.5) and Beckett.

Evaluating outcomes like this are one of the main reasons that Cardscore was created, as well as questions like:

A goal of Cardscore is to put questions like these and many others to the test. It’s also meant to be an enjoyable new experience for people that love this hobby. We are thrilled with the feedback we’re receiving so far. 93% of people who participated in The Jordan Project and took a survey after, enjoyed it so much that they said they would participate in other Cardscore projects in the future.

Next, we are launching The True Mantle Rookie Project, where collectors will score 30 different 1951 Bowman Mantles. They have been graded by various professional grading services and have different grades, so it will be interesting to see how this compares to the crowdsourced grading after it’s finalized.

Cardscore is paying the top 50 scorers each $50 for this project. Although scoring is supposed to be enjoyable and a service to the hobby, there will be some additional opportunities like this moving forward to help compensate scorers for their time.

The future plan for Cardscore depends on how collectors are enjoying it and whether the community believes it adds value. We believe allowing 100+ collectors to score important cards adds perspective to the hobby in addition to the professional grade. We have a lot of great things in store that we’ll be rolling out in a short time, and we hope you’ll join us on this exciting new journey!

Because after all, Collectors Know Best!

Cardscore is excited to announce the launch of our next large-scale crowdsourced card scoring project! This time around YOU and your fellow collectors will be scoring what many say is the most undervalued card of all time.

Starting Tuesday, May 4th, 30 different 1951 Bowman Mickey Mantle rookie cards will be available for scoring on our web app.

This time around, Cardscore is going to choose the top 50 scorers and pay them each $50 for their efforts! To have the opportunity to win this prize, go to Cardscore.com/Mantle-Project and sign up to be a scorer. 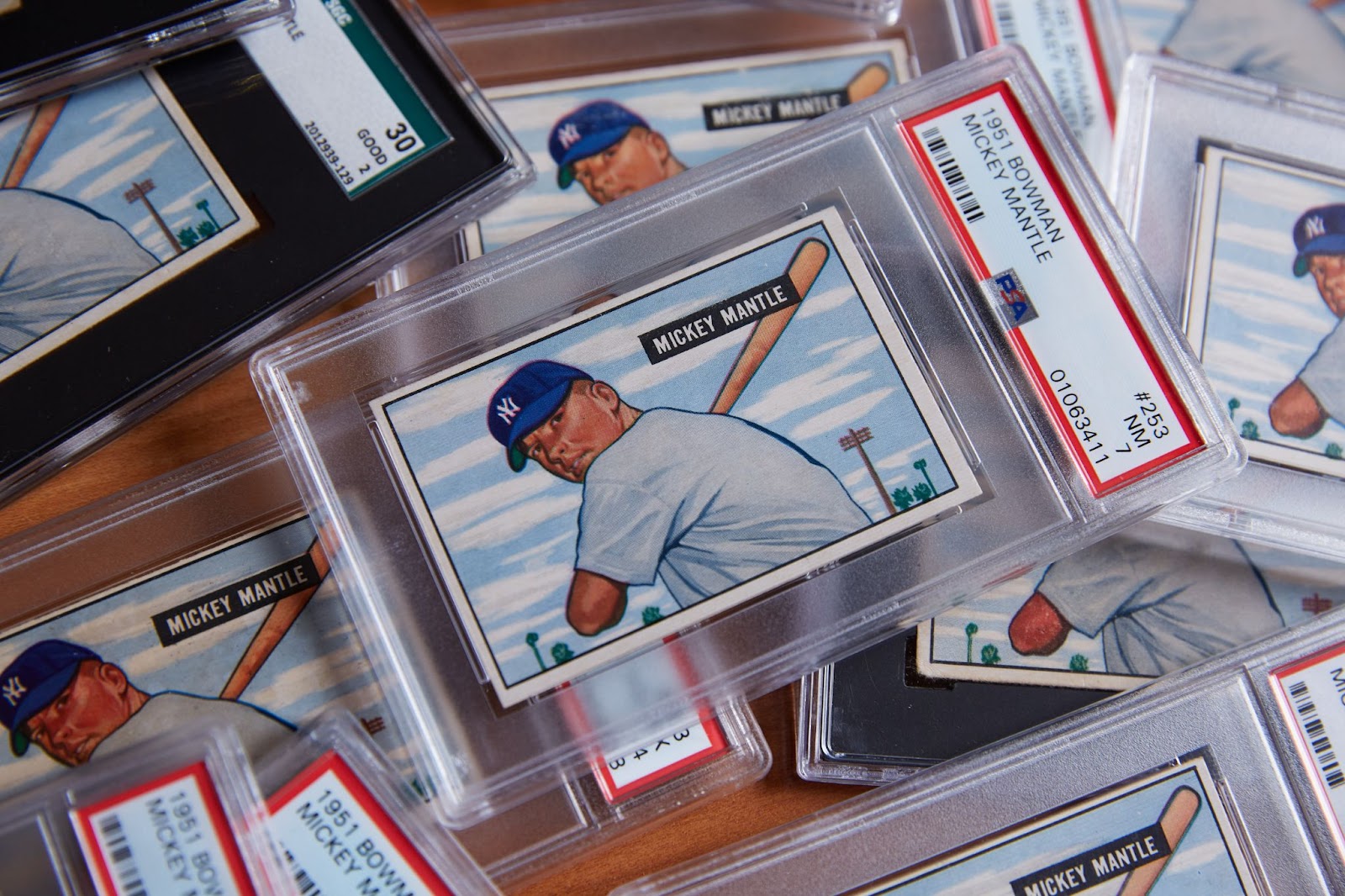 New to Cardscore? Here’s how the Mantle Project will work:

1. You will use your phone, tablet, or computer to view high resolution scans of 30 different Mickey Mantle rookie cards that have all been given various grades by the professionals.

2. You will have the ability to zoom in on each card and give it a score (grade) in four different categories – Corners, Edges, Centering, and Surface. Our scoring system is based on a scale of 1-100. A Cardscore 100 is a near-perfect card and the equivalent of a professionally graded 10. A Cardscore 90 is in the range of a professionally graded 9, and so on… Cardscore’s technology allows for cards to be scanned in at 1200dpi so that you can see plenty of detail.

4. We will publish the final results via email and social media.

5. We will choose the 50 scorers we feel do the best job and pay them each $50 for their efforts!

The scoring process can be done on phones, tablets or computers giving collectors the freedom to score whenever and wherever they want!

Sign up now at Cardscore.com/Mantle-Project and on Tuesday, May 4th we’ll let you know when you can begin scoring. Remember, the top 50 scorers will each receive $50 for their work! You’ll improve your chances to win by taking the time to score all 30 cards with accuracy. We hope you’re as excited as we are about this upcoming project featuring one of the most undervalued cards of all time!

Because after all, Collectors Know Best!

(And May The Fourth Be With You)

The results are in! You had the opportunity to view high-resolution scans of eight different Michael Jordan rookie cards that various professional graders gave an ‘8’.

We appreciate the time and effort collectors put in to help us pull off the world’s first-ever large-scale crowdsourced card grading project!

YOU the collectors have spoken and the scores you submitted have helped to determine a winner. We hope that you enjoyed having a say in the card scoring process!

Overall scores ranged from 79-85. It was close, but in the end, the SGC pictured below was the winner!

Continue reading to see the final results on all the other Jordan rookies you scored! You’ll notice that two other cards also had an overall score of 85. Cardscore rounds to whole numbers, so these two cards were very close, but the category scores on corners, centering, surface, and edges gave the SGC pictured above the slight edge.

Thanks again for using our platform to participate in The Jordan Project. Stay tuned for additional projects to be announced soon!

Cardscore recently launched The Jordan Project which allowed collectors to use app.cardscore.com to score (grade) eight Michael Jordan rookie cards that had all been professionally graded an 8. They viewed high-resolution images of each of the cards and gave them scores on a scale of 1-100.

This was the world’s first large-scale crowdsourced card grading project! We wanted to get feedback on what participants thought of the project, so we ran a survey. The results were outstanding!

When we asked about overall satisfaction of The Jordan Project, 87% of participants were satisfied or very satisfied.

We also asked participants if they would submit their own cards for other collectors to score (grade) if this was an option in the future. 70% of participants responded that they would.

We were most excited to see the results of the question that asked if they would participate in other Cardscore projects in the future that feature different cards. An astounding 93% responded that they would!

We appreciate everyone who took the time to participate in The Jordan Project, and also those who took the survey. Respondents were also given the chance to provide a short answer with any feedback they would like to give on the project. We are taking the time to read through these responses and prioritize updates and modifications for our platform.

Cardscore is driven by YOU the collectors. Our goal is to allow the collector community to have a say in the card grading process. Your opinion matters to us, and that’s why we are taking the time to collect your feedback.

Please stay tuned for a new project to be announced in the near future. 93% of you said you would participate in another Cardscore project, so we’ll be delivering that to you very soon!